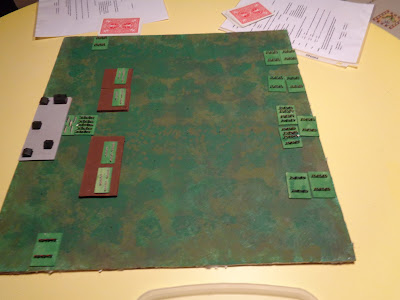 H-V bows above the village on the left. Mongols on right side of board. 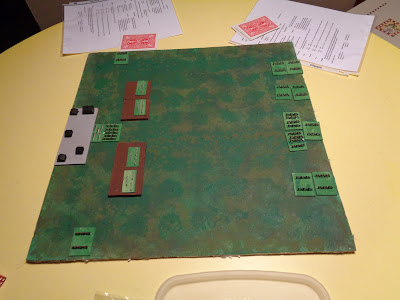 Cossacks hold down the Halych-Volhynia flanks on the left. 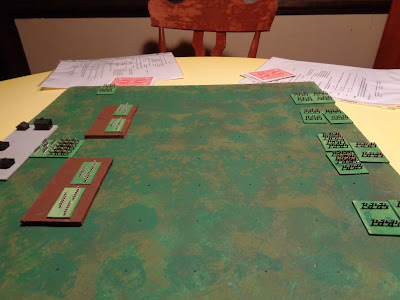 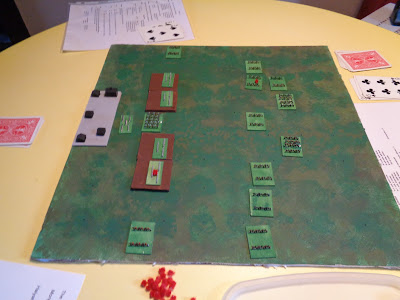 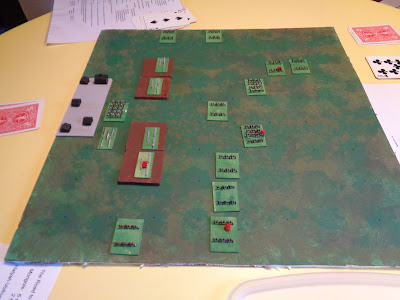 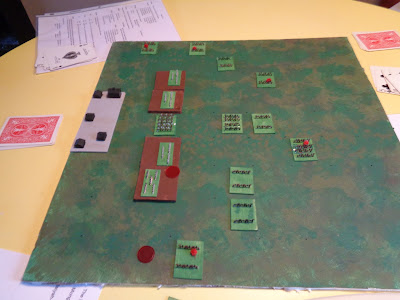 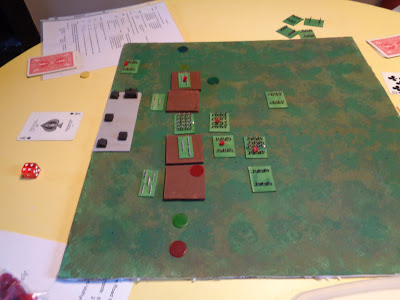 Bows taking heavy damage but manage to drive off the Mongols 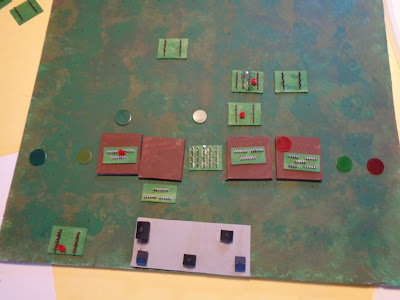 The Mongols are temporarily slowed, but the Siege of Kyiv awaits.

Testing out some new experimental WARG rules, using a playing card activation system. The board has 2 inch squares and consisted of a 9 by 9 playing area (allowing division of the battlefield of left, right flanks and Center for the activation system) The battle was balanced for gaming purposes and provided a challenging afternoon. Used my 2mm painted granny grate armies which used DBA basing.

Posted by Rick Krebs at 1:53 PM No comments:

The Borg, Carthaginians, Syracusans and the Dorf 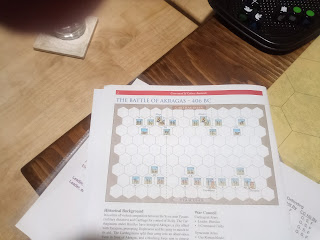 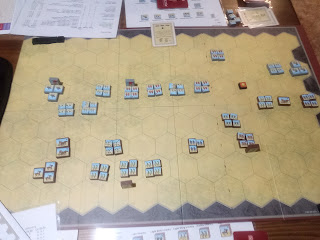 Syracusans on top of board and Carthaginians on the bottom. 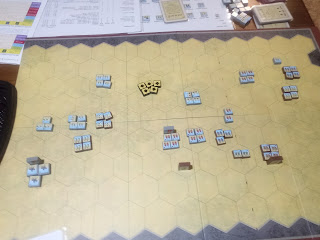 Syracusans with a come from behind victory over the Carthaginians
A WARG learning session with Richard Borg's Command & Colors Ancients using the Battle of Akragis scenario.
Special thanks to Frank, who hand placed all those dang stickers on the counters.  Who has time for that ? when you could be playing  DORFROMANTIK

Posted by Rick Krebs at 8:39 AM No comments: 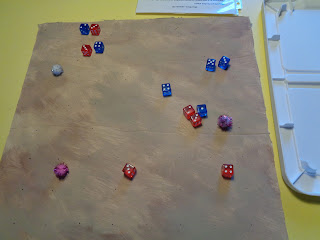 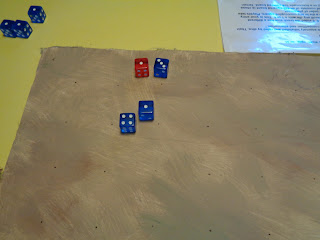 Wednesday Afternoon Retired Gamers (WARG) are back with ...

“Welcome to a space/time anomaly inhabited and ruled by dice. Their existence is governed by competition and elimination.”

Setup: Each side rolls 6, 6 sided die (each side has a different colored set of dice) . Reroll any die with a 1 or 6. This is your army.

Initially, place a die in any unoccupied square. Players take turns in order of placement.

Playing board consists of an 8x8 squared board (a chess board, will do nicely) or a homemade 9x9 squared board. Terrain optional.

Dice to see who goes first, and then alternate turns or you can roll die every turn to determine who moves first.

Activation: roll a 6 sided die to determine how many units (die) you can move.

Movement: any die can move into any square.

Attack: A die in the same square as an opponent's die, must attack. Each side rolls a 6 sided die, higher die roll wins the battle. The losing die/dice decreases the number on the die/dice. When a die with a 1 on it loses a battle, the die is removed from the board.

Modifiers: Die that initiates combat adds 1 to its die roll.

Victory: Play continues until one side is eliminated.

Addendum: maximum of 2 die of each color in a square.

These rules allow for up to 4 players.

(c) copyrighted in 2022 by Rick Krebs,   All rights reserved

Posted by Rick Krebs at 1:56 PM No comments:

From "the Esoteric Order of Gamers"

When heroes go down.

On the terrible revelation that Professor Barker was a Nazi sympathiser and anti-Semitic.

The very first roleplaying game I ever encountered was Empire of the Petal Throne by Professor M.A.R. Barker, published by TSR in 1975. It was 1978, my first year of high school, and I walked into the school library. After being relatively popular in primary school I was finding it hard to find my feet in high school; I hardly knew anyone, I was a pretty sensitive, artistic kid who didn’t want to play ball games; and later I’d find my first year pretty tough when I became the target of bullying. In the library I walked past a few guys sitting at a table doing something I found interesting; I asked what they were doing and one of them said “we’re playing a game where you create the game.”

I’m still playing role-playing games with that guy to this day, and I’ve pretty much dedicated my life to roleplaying, board, and tabletop games.

Which is why it hurts, annoys, frustrates, and shatters me to a degree I can’t express when it was confirmed this morning that Professor Barker was a Nazi sympathiser and anti-Semitic. The full statement by the Tékumel Foundation is reproduced at the end of this article.

I first heard rumours that Professor Barker had published an anti-Semitic novel called Serpent’s Walk In October of 2019, when I was contacted by someone via email about the subject. My initial reaction was one of disbelief. I mean, Barker was a Muslim and a Professor of Urdu; for some reason the thought that he could have been a Nazi racist just didn’t compute. I immediately informed the Tekumel Foundation. And at that point, I did something I now regret – I forgot about it and didn’t follow up. As unpleasant as the possibility that this was true was, for some time I had had very little to do with Tékumel, and I was extremely busy with my personal and professional life and the demands of the Esoteric Order of Gamers.

I started the tekumel.com website back in 1994 when I realised that Tékumel had no online website of its own, and a few years later entirely revamped it, but I’ve not updated it beyond a few lines of news for many years. My initial enthusiasm for bringing Tékumel to a wider audience faded away, and I left all such matters to the Tékumel Foundation and the more dedicated fans of Tékumel. In fact, I haven’t actually roleplayed in Tékumel since those first very basic efforts back in 1978 (we quickly shifted to Dungeons & Dragons) – I was always more interested in the world than the games. At various times I’ve considered running a crowdfunding campaign to revamp the website in WordPress form, but I’ve never got around to it.

In short, I was not frequently involved with Tékumel at the time, or since, and after passing on the information about this supposed novel, forgot about the issue. For this, I unreservedly apologise.

Several days ago, the subject came up again on a popular roleplaying game forum, I saw a tweet by a Tekumel fan about the subject, and now reminded, I immediately contacted the Foundation again to ask if they had discovered the facts, as I knew I would have to make a public statement regarding the matter. They informed me they were preparing a statement. While I waited for that statement, I hoped against hope that this was all some kind of misunderstanding. I had never detected any overt racism or aberrant beliefs in what I’d read of Barker’s writings; he seemed an eccentric, highly creative man obsessed with his fully-realised fantasy world. In fact I often praised his creation for breaking out of the usual fantasy tropes and incorporating inspiration from other cultures, ancient and modern. As a young person fascinated by archaeology, this kind of creativity inspired me. There even seemed to be gender equality, with women being able to declare themselves Aridáni, or the equal of men, in Tsolyáni society. Given a lot of the clichéd fantasy I read as a child, this approach felt almost revolutionary.

Sadly, the Foundation’s statement has now been released, and it appears the rumours were true. Barker, under a pseudonym, did publish an anti-Semitic novel with a white supremacist publisher in 1991.

I’m still trying to come to terms with this, and while I do so, I’ve placed the statement on the front page of the tekumel.com website. In the coming days I will consider whether I want to continue to be responsible for the website. The issue of separating the art and the artist is a complex one. Many people abhor Lovecraft’s unforgivably racist views, for example, but still enjoy his creative inventions. Barker’s imaginative legacy is now forever tarnished by its author’s stupidity and obscene beliefs, and everyone must make a personal decision about how they deal with this new information.

Let me make it absolutely, 100% clear: I am utterly repulsed, sickened and horrified by the twisted beliefs Professor Barker held. Such aberrant ideas go against everything I believe in and live by.

Lastly, please go easy on fans of Tékumel; I would guess that all of them are are saddened and horrified by this revelation as I am. We’re all gazing with shock upon our idol’s feet of clay for the first time.

Sadly, my relationship with that sensitive 12 year old who walked into the library in 1978 has forever been changed.

The Tekumel Foundation Board of Directors statement on Serpent’s Walk:

That this acknowledgment was not done earlier was and is a mistake, and we apologize for that. We have been reaching out to several Jewish organizations to express our outrage over our findings and make our priority to work with them through this issue.

What Professor Barker did was wrong and forever tarnished his creative and academic legacy. As stewards of the world of Tekumel, we reject and repudiate Serpent’s Walk and everything it stands for and all other anti-Semitic activity Professor Barker was involved with.

The Tekumel Foundation has never been involved with or profited from the publication, distribution, or sale of Serpent’s Walk in any way, shape, or form. All of the proceeds from sales of Tekumel-related material have gone and will continue to go to the Foundation and its work, and not to any racist or anti-Semitic organizations or causes, in any way, shape, or form. 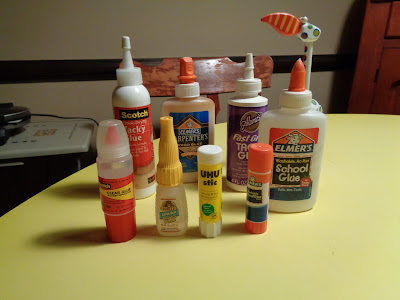 The Triple Entente, or Allied Powers, declared war on the Ottoman Empire on November 4, 1914. What have you done, Enver Pasha ?

Time for testing the WARG rules with World War 1 paper armies (courtesy of Junior General.org), but, not on the Eastern front. Instead, it's the Western front with the "Harlem Hellfighters" (369th Infantry regiment) versus the Germans. Objective: repair a damaged "Water Tank" during a lull in Artillery fire. 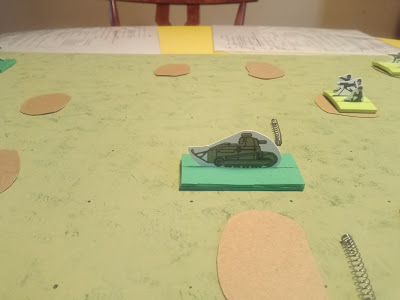 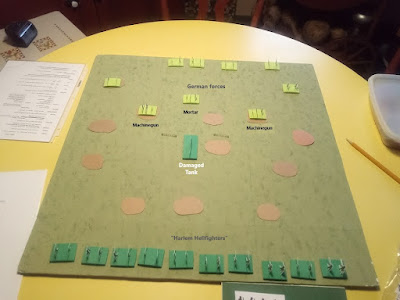 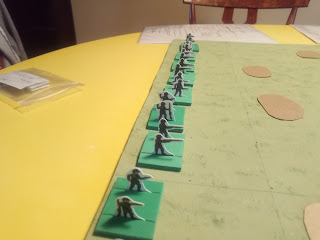 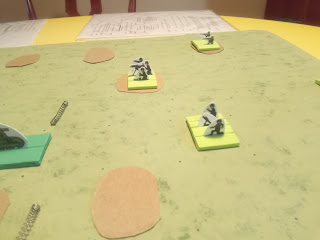 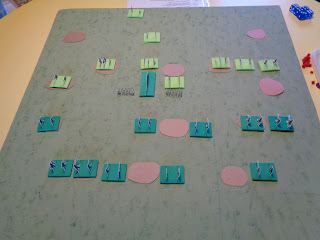 The Germans take some advanced shell holes for cover 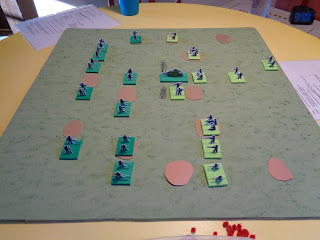 The battle is joined 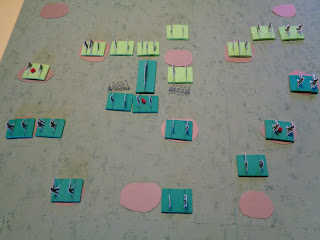 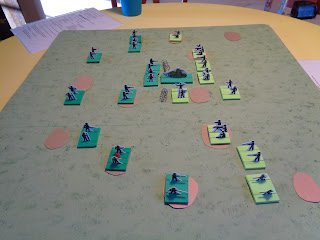 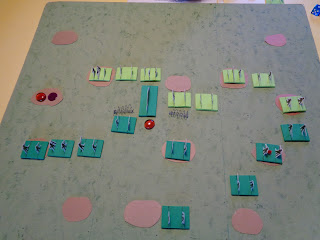 The Germans suffer losses on their right flank, while US engineers trying to start the tank are eliminated 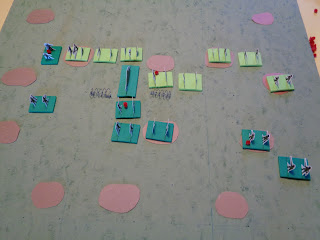 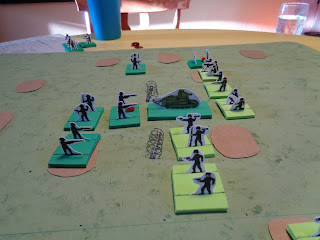 But, the Germans push them back 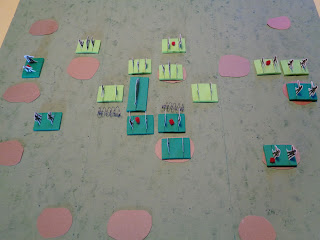 The Hellfighters are taking heavy casualties 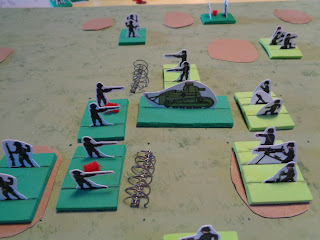 The battle centers on the disabled tank, as repairs begin 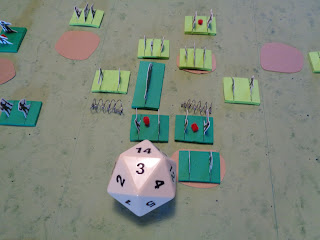 The spark plug installed after 3 turns and the engine fires.
Mission accomplished

While we were experimenting with the WARG rules, there is another simple & inexpensive set of WWI rules, available as a PDF, named  "Trench Hammer" .

Posted by Rick Krebs at 2:35 PM No comments: 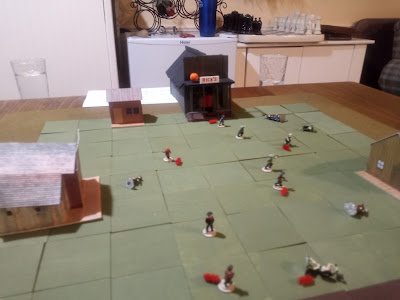 The good people of the post civil war town of Cody faced the threat of a take over from a Vampire led gang of zombies and ghouls.  However, led by Marshal Marshall, the city folk bravely defended their town and dispatched their ghastly foes.

Posted by Rick Krebs at 4:43 AM No comments: